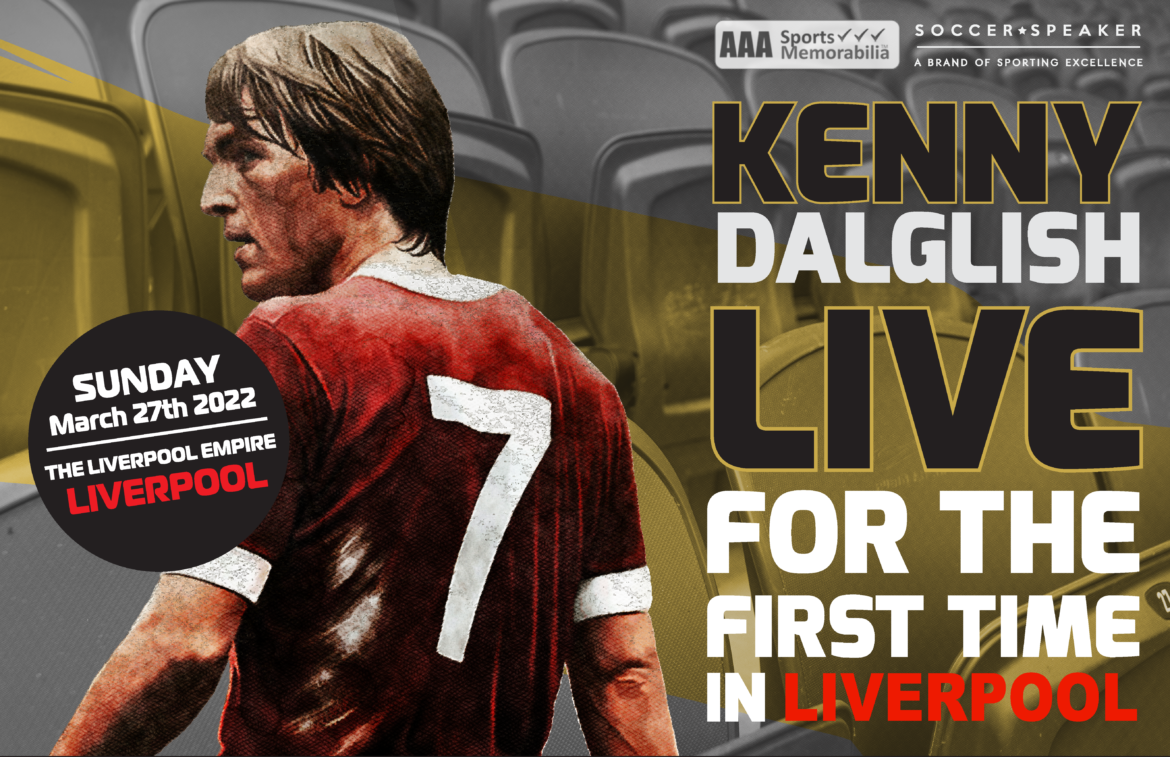 For the first time live, Kenny Dalglish will be talking about his life in and out of football. In a question-and-answer format, he will discuss the great times and the tough times he has endured throughout his illustrious career.

Kenny will be interviewed by his daughter, Kelly Cates, now a successful Sky Sports pundit. There will be a chance to meet Kenny in person on the night and get a professional photo taken with the King himself.

Kenny Dalglish’s love for Liverpool began in August 1966 when a 15-year-old Glaswegian travelled south of the border for a trial at Anfield in front of the legendary Bill Shankly. Unsuccessful in the football trial, this did not put the football icon off. 11 Years and 167 goals later, he was finally recruited by the Reds to replace club legend Kevin Keegan.

Kenny had an incredible playing career that would make him an Anfield icon.

As Dalglish neared the end of his playing days, it appeared impossible for him to improve his standing among Liverpool fans. But that is what he went on to do, with two spells as manager he later became known as King Kenny.

His impact on the playing field had been nothing short of sensational but, in the aftermath of the Heysel Stadium tragedy, the club hoped he could reproduce his genius in the dugout. It was a big ask for someone who was just 34 years old, but then Dalglish was not your average man.

“There is no-one anywhere in the world, at any stage, who is any bigger or any better than this football club.”

King Kenny assembled one of the most entertaining Liverpool teams ever to grace the Anfield stadium, with two further league titles and another FA Cup to add to the collection before he stepped down in 1991. He returned to the Reds between 2011 and 2012 securing the League Cup winner’s medal that had previously eluded him as a boss.

Regardless of his incredible footballing achievements that go down in the history of the sport, Dalglish’s dignified conduct in the aftermath of the Hillsborough disaster is one of his greatest legacies and sees him widely regarded as a legend of the city of Liverpool, not just the club that bears its name.

Join Kenny, in an intimate setting at the Liverpool Empire theatre where he’ll take the audience on a journey of his incredible career and share the love for Liverpool Football Club that he holds so very close to his heart.

To book your tickets to see Kenny in Liverpool, click here.