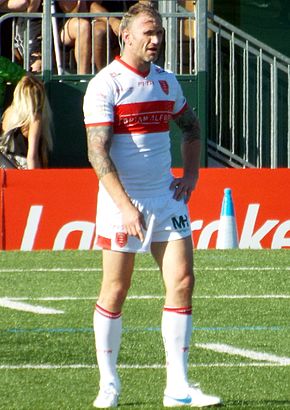 Jamie Peacock MBE, a player of undoubted talent, who through his determination and commitment both on and off the pitch has been able to earn respect from not only his team mates but his opponents on both sides of the hemisphere and has twice been named as the best forward in the world. Jamie is considered to be one of the best players of his generation having won every honour in the domestic competition

An outstanding moment in Jamie’s career came in 2011, when Jamie made his return from a career threatening injury to help the Rhinos make history by becoming the only team to win the Grand Final from outside the top three, this was Jamie’s record-breaking 7th Grand Final win. He then captained England in the autumn Four-Nations tournament where they exceeded expectation and made the final, losing to Australia at Elland Road. To finish off another excellent year, Jamie was recognised in the New Years Honours List and was awarded a MBE for his services to the game.