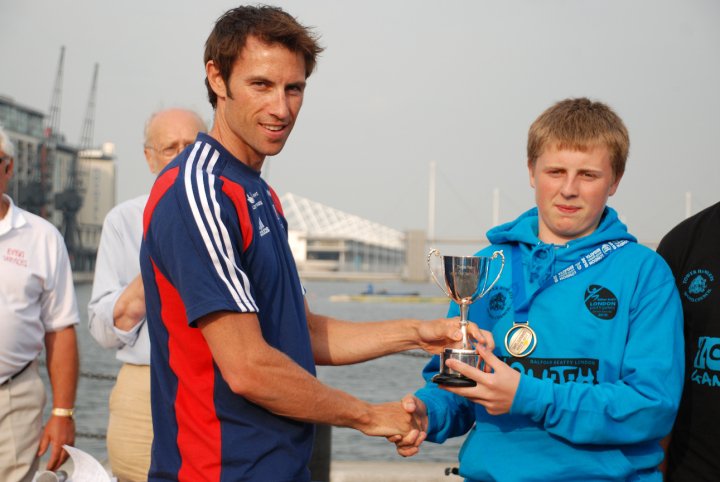 An inspirational and determined rower, Mark Hunter made history at the 2008 Beijing Olympics when he won Team GB's first ever lightweight rowing gold medal.

He was introduced to the sport by his father at the age of fourteen and began rowing at Poplar Blackwall & District Rowing Club. His talent soon became apparent and he went on to represent his country in the World Junior Championships in 1995 and 1996, and the U23 World Rowing Championships from 1997 to 2000.

2001 saw Mark make the decision to change class and race as a lightweight. This was a turning point in his career and led him being selected for the Olympic Games in Athens. Unfortunately, the dream did not become reality when his crew finished a disappointing last in their event. However, not one to be deterred, Mark was determined that the Olympic dream was not over, and on his return home he began his training regime. The prestigious Leander Club also appointed him as captain, confirming his role in the rowing world.

All of the training and hard work paid off and by 2008 Mark, and his rowing partner Zac Purchase, became a force to be reckoned with. Remarkably, they were the only unbeaten crew in the world of rowing, sealing their status when they won Olympic gold in Beijing.

The following year saw Mark take a break from competitive rowing when he spent time as a coach. However, he was soon back training - this time his sights were set on defending the lightweight double sculls title at London 2012. In the meantime he won gold at the 2010 and 2011 World Championships (once again with Zac Purchase). The duo were on course to win gold in London, but were just pipped at the post finishing in a very credible second position, adding an Olympic silver medal to the collection.

Retiring from full time rowing after the 2012 Olympics, Mark worked as a Project Manager in London. Relishing a new challenge, he then took on the role as Programme Director at London Youth Rowing, a charity that promotes diversity and inclusivity by enabling young people to participate in the sport regardless of their background.

Mark was awarded the MBE in 2009, and in 2011 was named the Olympic Athlete of the Year for the sport of rowing.

Mark also works as a motivational speaker sharing his story, his lifelong goals and the ups and downs along the way.