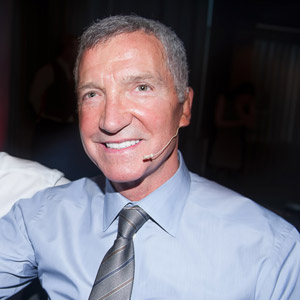 Graeme Souness motivational and after dinner speaker was born in 1953, a former Scottish professional footballer and manager.

Graeme is perhaps best remembered for his time spent at Liverpool. He was a member of the very successful team that won five League Championships, three European Cups and four League Cups. His time with the Reds began in 1978 when he joined two other recently signed Scottish players – Alan Hansen and Kenny Dalglish. All three went on to become legends at Anfield! Graeme made his debut for Liverpool in a 1/0 league victory over West Bromwich Albion on 14 January 1978. His first goal for the Reds came the following month in a match against arch rivals Manchester United. He remains one of just four Reds captains to lift the European Cup.

Graeme left Liverpool in 1984 and joined Genoa based club Sampdoria. In 1986 he took on the role as player manager at Rangers.

Graeme received his first international cap for Scotland in 1974. He went on to play in three World Cups – 1978, 1982 and 1986. He made a total of fifty four caps for Scotland and scored four goals in the process.

Graeme was appointed player manager at Rangers in 1986. The ‘Souness Revolution’ saw the signings of a number of high profile players from English teams – Terry Butcher, Chris Woods, Trevor Steven, Gary Stevens, Trevor Francis and Ray Wilkins. This was a reverse of the usual trend of talented Scottish players playing for sides in England. The newly revitalised Rangers soon began to have success and dominate Scottish football in his first season they won the Championship and the league cup.

In 1981 Graeme returned to Liverpool as manager. He went on to manage a number of other high profile clubs including Galatasaray, Southampton, Torino, Benfica, Blackburn Rovers and Newcastle United.