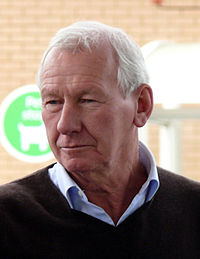 A former schoolteacher, Wilson started off as an amateur with Wolves. Before he joined the Arsenal and he quickly established himself as one of the most intelligent goalkeepers to ever play the game.

Wilson was born in Chesterfield with Scottish parents; he was the first ever England-born Scottish international. Manager Tommy Docherty selected him in 1971, the same year he helped Arsenal win the League &amp; FA Cup. Bob played 234 league matches for Arsenal. In his mid-20s Bob started an apprenticeship as a television broadcaster with the BBC.

The face of ITV football Bob was their number one anchorman until 1999 when Des Lynam arrived. Bob and his wife Megs unfortunately lost their daughter Anna to cancer in 1998 they set up a charity called the Willow Foundation in her memory, with this charity they have helped thousands of suffering people with life-threatening illnesses.

Bob has an OBE; he is an inspiring and interesting after-dinner speaker who has lots of tales to tell about his life and broadcasting