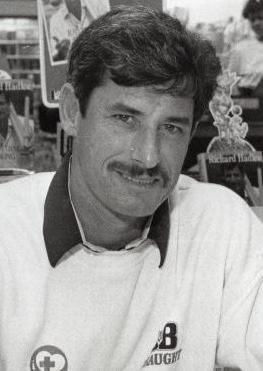 Hadlee tormented English batting for well over a decade and here we see him dismissing Gooch LBW for a ‘golden duck’ at Trent Bridge during the First Test in 1990.

As a hard-hitting batsman, Richard Hadlee was more than capable, but as a bowler he truly excelled. With a fearsome reputation for controlling pace and cut, Hadlee fully justified his epithet as the ‘Master of Rhythm and Swing’. His hostility to opposing batsmen became legendary and, in only 86 Test Matches during his career, Hadlee claimed an incredible 431 wickets. In an age where cricketers played far less Test Match cricket than they do now, this achievement is all the more remarkable.

England’s first ever defeat to New Zealand, in 1978, came about as a result of some true Hadlee magic. Swinging the ball to the England batting order’s complete bemusement, Hadlee claimed 10 England wickets with figures of 6 from 26 runs in the second innings. His side-on action saw some modification as the years passed, with his earlier searing pace giving way to a slower, more controlled delivery, but his wicket-taking ability never diminished.